Despite a constantly changing audio landscape, broadcast radio controls 61% of the more than four hours a day that Canadians spend with all sources of audio.

The audio space in Canada is vibrant and changing, and now 9% of time spent listening to audio is with pureplay streaming services in Canada  such as Spotify, Apple Music, Google Play and others.

In Canada 74% of radio tuning is to music stations.

Those are just a few of the findings from Share of Ear®, Canada, the groundbreaking new study from Edison Research that provides the first consistent measurement of all audio consumption, including AM/FM radio stations, online radio stations, podcasts, streaming and even listeners own music collections.

The study was commissioned by Radio Connects, Canada Radio Marketing and Advocacy Group.

Share of Ear® results reveals that Canadians spend an average of 4 hours and 14 minutes each day consuming audio, and more than 61% of that time goes to broadcast radio on all its various platforms.

The Share of Ear® study allows users to look at audio usage across many parameters, such as location of listening, the devices on which audio is consumed, listening by time of day, the type of audio content (music, news, sports, or talk/personalities), and even across individual brands within the Online Radio space.

The Share of Ear® study has been running since 2014 in the U.S., allowing for a comparison between us and our neighbors for the first time! This shows us that Canadians listen to more radio than Americans!

How the Study was Conducted: 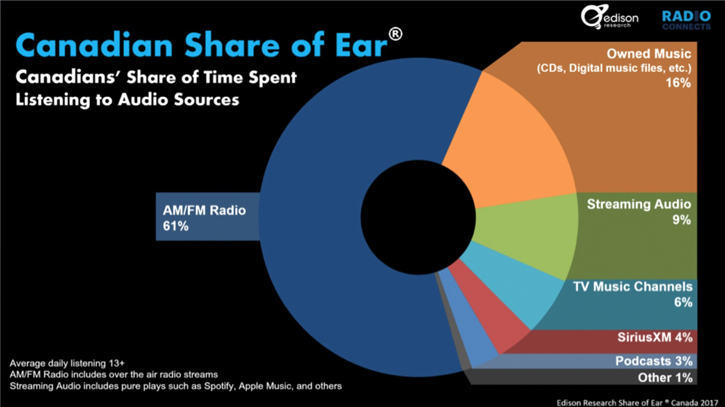